The rice weevil are the most destructive insects of the grains which causes almost 50% damage to the stored grains throughout the world.

It is a serious pest of rice. They prefer humid condition and multiply rapidly in stores if left undisturbed. Adults feed upon whole seeds or flour but the larvae feeds only upon seeds or cereal products. The major damage to grains is done by larvae.

Damage- Rice weevil is a serious pest of rice but is also seen feeding upon maize, barley, Jowar and Sorghum in humid conditions. The larval stage is found to be more destructive than the adults but both adults and larvae damage the grain. Maximum damage occurs between the month of August to October and very less in summer.

Life Cycle- The female weevil between April to October, lays about 400 eggs in the holes of seed made by her mandibles. After 6 to 7 days of incubation eggs are hatched into larvae. The larvae feeds and convert into Pupa and after 6 to 14 it emerges into adult weevil. The lifespan of the adult weevil varies from 4 to 5 months. 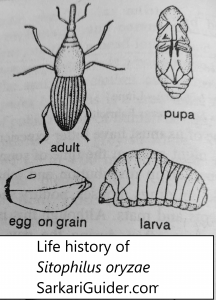 It is the main pest of wheat but other than that it also feeds upon rice, maize, oat, jowar, barley, gram and pulses. Only larval stage is the infective stage.

Life cycle- Adults after 2 to 3 days of emergence copulates and fertilized female Lays eggs at the rate of of 13 to 85 eggs in 1 to 7 days. After 325 days of incubation eggs hatch into larvae and male attains fullgrown stage in 20 to 30 days while female in 24 to 40 days after this they pupate. Adult weevils emerges after 4 to 6 days of pupation. The breeding period is from April to October.

It is a serious pest of stored gram and cowpea but also feeds on other pulses. Grubs are found to be the only infective stage for the stored grains. Maximum damage is reported from April to October. The first evidence of infestation is the holes on grains. Humidity and temperature are the factors on which intensity of infestation is dependent.

Damage- The major infestation is reported by the larvae in the month of April to October. All the grains of the infested Store are damaged buy this paste only and the infested grains becomes useless for human consumption.

Life cycle- Others populate just after the emergence and fertilized female lays oval scale like eggs at the rate of 1 to 37 per day which are attached with the grains. Eggs hatches into larvae after 7 to 14 days of incubation. Larvae bore the grains and complete their development inside the grains. After 10 to 12 days in the month of August and September the larvae converts into white coloured pupa. After 4 to 28 days, the pupa emerges by cutting a circular hole in the seed coat. The lifespan of the adult beetle varies from 5 to 20 days according to the climatic conditions. 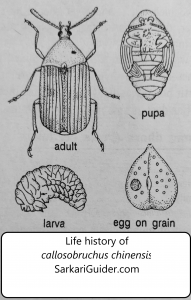 This moth causes damage to stored paddy and jowar but is also seen damaging wheat, barley and maize. They also attack wheat in the field.

Damage- Maximum damage has been observed in monsoon period. The larvae feeds on the grain and makes a hole. They have been observed to cause 30 % damage to the grains but sometimes they destroy the grain completely. It is also observed that mostly the upper layer of the grains in the store is severely attacked.

Life cycle- After 24 hours of emergence the moths starts mating and after fertilization the female moth lays approx 150 eggs within a week. It was found that at 20, 25, 30 and 35℃ eggs hatch in 8.5, 6.0, 4.1, 4.6 days respectively. The young larvae feeds on the seeds for about three weeks and gets converted into pupae which is reddish brown in colour which ultimately emerge into adults. The male has smaller lifespan than the female. The whole life cycle takes about 28 to 37 days. 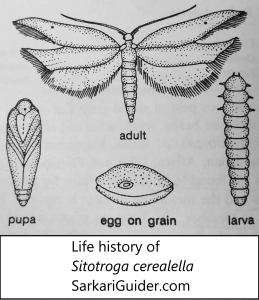