Bipan Chandra is a renowned author and historian from India. Apart from this book, Chandra has written a number of other books, and they include Essays on Colonialism, The Epic Struggle, Communalism in Modern India, The Rise And Growth Of Economic Nationalism In India: Economic Policies Of Indian National Leadership, Indian National Movement: The Long Term Dynamics, and In The Name Of Democracy: The JP Movement And The Emergency. Chandra was born in Himachal Pradesh, and he completed his schooling from Forman Christian College in Lahore. He completed his degree from Stanford University, USA, and went on to earn a doctorate from the University of Delhi. For several years, Chandra served as a professor at Hindu College, Delhi. Later, he taught history at Jawaharlal Nehru University. In the year 1985, he was selected to be the General President of the Indian History Congress. He has also served as the Chairman of the National Book Trust, New Delhi. Chandra has also been a part of the University Grants Commission, New Delhi.

Published in the year 2009, History Of Modern India is a book that revolves around the history of British India, throwing light on the nationalist movement and colonialism.

Summary Of The Book

History Of Modern India is a book that is written by renowned historian, Bipan Chandra. The contents of this book are a result of Chandra’s research on the subjects of colonialism and nationalism in the country. Apart from his research, Chandra has also drawn from the works of renowned historians during that time in history.

In total, there are 14 chapters in this book that cover different periods in Indian history. Some of the chapters in this book include Indian States And Society In The Eighteenth Century, Religious And Social Reform After 1858, The Struggle For Sawaraj, The Nationalist Movement, European Penetration And The British Conquest, Social And Cultural Awakening In The First Half Of The Nineteenth Century, The Decline Of The Mughal Empire, and The Revolt Of 1857. Some other chapters include The Nationalist Movement: 1858-1905, Administrative Changes After 1858, and Administrative Organisation And Society And Cultural Policy.

This book doesn’t focus on the political factors during that period, but deals with the economic, religious, and social history of India. Through the course of this book, Chandra provides insight on several events in modern Indian history such as the establishment of the British East India Company, which led to a tightened grip of the British over India. Chandra also explains that the major reason behind the colonial rule was to exploit India by means of investment and trade. The chapters in this book are arranged in chronological order, starting from the British Rule to the independence of the country. This piece of literature provides its readers with loads of information on the nationalist movement, throwing light on the contributions made by several different individuals. This book is a must-have for history students as well as for those who want to gain insight into the history of modern India.

This book was published by Orient Blackswan in 2009.

The Decline of the Mughal Empire

Indian States and Society in the 18th Century.

The Beginnings of European Settlements

The British Conquest of India

The Struclurc of the Government and the Economic

India And Her Neighbours

Economic Impact of the British Rule

Growth of New India Religious and Social Reform After 1858 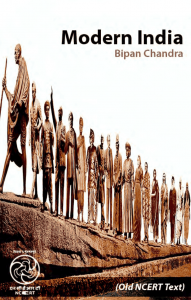