MEDIEVAL INDIA -FROM SULTANAT TO THE MUGHALS -PART TWO

History Of Medieval India is the second book in a series written to provide a comprehensive overview of the history of the Indian subcontinent.

Summary Of The Book

History Of Medieval India covers the historical landscape of the Indian subcontinent over a period of a thousand years, between the eighth and eighteenth century AD. The book starts off with a bird’s eye view of the state of the world during the medieval period, before dwelling on the rise and fall of empires in the Indian subcontinent.

Writing about the history of India is a daunting task, but the author has attempted to carry out the task with the eye of an inquirer and the pen of a scholar. The book has been written keeping in mind readers who may have some basic knowledge of the political situation in medieval India and would like to pursue the knowledge further. The book elucidates the beginnings, growths and deaths of many a dynasty, including but not limited to the Cholas, Rajputs, Vijayanagara kings, Bahmanids and the Marathas.

History Of Medieval India’s primary merit lies in the fact that it departs from the well worn path of writing about dynastic history alone and looks at the social, political, cultural and economic developments that the period gave rise to. Some of these developments still have significance in contemporary relevance, such as the caste system which seems to have been born around this period.

The author has done a tremendous job in condensing such a large amount of subject matter in such a small space.

Satish Chandra is among India’s most well known historians.

Satish Chandra was a reader in history in the Aligarh Muslim University before joining the Jawaharlal Nehru University as a professor and co-founder. He was the first dean of the School of Social Sciences in JNU. He is a Marxist Indian historian. Satish Chandra is best known for his works on Indian medieval history. 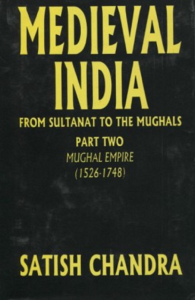